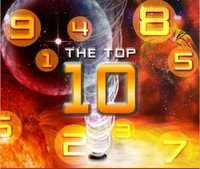 I did this last year and I still get hits to the old article so -- poof! The 2008 edition is born!

Again, these games may not be 2008 releases but I played them for the first time this year. I have a few games that I haven;t played yet that I feel might make this list but the odds of me playing them by January...not likely.

10. Age of Napoleon - 2 player grand level card driven wargame where one player plays the little general and the other plays the allies (Prussia, Russia, England, Austria) who try to squish France. The rules for this are tough to read but the game isn't too hard. Once you get past the learning hump -- damn fine game with great bits.

9. Pandemic - One of the "hot" games of 2008, Pandemic is a co-op game where players take on various roles -- medic, engineer, etc. The goal? Stop the killer viruses before mankind bites the dust. No pressure. I like Pandemic, but some lavish this with GOTY praise. Not sure about that...

8. Friedrich - This might have been higher but I only played it a couple of times. Another wargame, this is built for 4 players based on the Seven Years War. The catch here is that battles are resolved via playing cards -- as in spades, aces, etc. I've never played anything quite like it.

7. Formula De' - I'm not a car guy but this dice fest is a real hoot with a lot of people. We played it at Todd's place and it went over well. Plus I can play this with Ash -- so, bonus points. This was just released I think. I have the old version.

6. Star Wars: Original Trilogy Risk - Yep. RISK. This version is based on the real Star Wars movies and drips with theme (you can control the Death Star and blow stuff up!) Plus it plays in about 2 hours and even though the basic design of RISK is just 'ok' this variant is an excellent 3 player game (Rebels, Empire, Hutts) if you love Star Wars before George Lucas took a whiz on it.

5. Warrior Knights -- I have the expansion on the way and I've had this game for a while but finally played it this year -- glad I did. This is a really, really good game. Theme, player conflict, strategy, some luck, and original design ideas. You need 3 and preferably at least 4 players for it but if you can get people together this is A List stuff. With 6 players? Total chaos.

4. Cutthroat Caverns - The game that Todd almost pulled a General Lee on (he'll have to explain that in joke). A card game where you have to work together and at the same time stab each other in the back. Play it with people you know or a fight might break out. Highly recommended with at least 4 people. :)

3. Mare Nostrum with the Mythology Expansion - This is a "civilization" type game where you play a ancient society: Rome, Greeks, Egypt, Carths, Atlantis (yep), and the Babs and try to conquer the world either militarily, economically, or via diplomacy. Again this works best with at least 4 players and if you have the table space it's a stellar game. You must get the Mythology add on which adds more Gods and a better rule set 9and adds Atlantis..) Love this one, but don't get to play it enough.

2. Rails of Europe - I will always have a soft spot for Railroad Tycoon which was the game that got me headlong back into boardgaming. Rails of Europe (an expansion) actually has a much better map that causes more direct conflict. A+.

1. Warriors of God - Two player game about the Hundred Years War. It's easy to learn, chaotic, historically brilliant, and is really without question the best new game I played this year. Mary is no wargamer, but even she loved this. This game made me go out and read a few books about the period and any game that does that did its job and then some.

All in all a pretty good year.
Posted by bill abner at 1:46 PM

Bill Abner (me) is the Editor in Chief at GameShark.com and also has written for websites such as GameSpy, Crispy Gamer, and The Escapist as well as Computer Games Magazine. GO BUCKS.

Todd Brakke is my loyal Wolverine lapdog. He also writes for GameShark and when he sees this new description he's sure to mail bomb me. (Yeah, I wouldn't open that mailbox yourself for a while. ---Todd)

Stuff Todd's Been Into Lately